A Review of Common Scanning Technologies in Pedorthics

Scanning technology has accelerated over the past 20 years. Looking back on those early days when scanners were bulky, slow, unreliable and expensive, the scanners of today are infinitely more affordable – offering increasingly lightweight, real-time, and precise 3-dimensional impressions. This is a review of contemporary scanners available to clinicians in the foot orthotic space.

The most basic principle behind structured light 3D scanning is triangulation. Light is projected in a pattern – usually in a series of parallel lines – that becomes distorted on the surface of the object.

Next, cameras capture this distortion from multiple angles, and triangulation calculates the distance to specific points on the object, and the three-dimensional coordinates are used to digitally reconstruct the object in great detail.

Structured light scanning generally is considered more accurate than previous methods (such as the laser method) due to a greater amount of information available due to variations in line patterns and thicknesses that light scanners are capable of projecting. The type of light being used is where current scanning technology differs from this.

Below is a description of the different structured light scanning approaches available in the pedorthic space and some preliminary findings from our in-house scanner testing done at Kintec.

The types of coloured light used in structured light scanning are both white and blue light. Although both options are effective in terms of accuracy and speed, blue light offers some benefits over white light in certain situations, because it has an LED source that lasts longer and a cooler operating temperature.

Collectively, these features of the blue light scanner often mean blue light is used in higher-end scanner devices, such as the Steinbichler Comet that can capture 2-million measurement points in only 1.5 seconds (see Figure 1), resulting in astonishingly accurate images.

In contrast, a less-expensive scanner using white light, such as one developed by ScanPod3D, has a noticeable reduction in accuracy (as seen in the lack of detail in the reference nobs in the bottom of Figure 1). 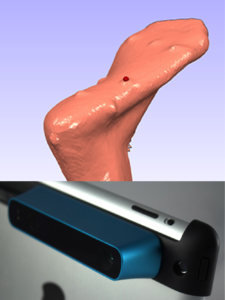 Occipital’s Structure Sensor also uses a structured light process; however, instead of blue or white light, the Structure Sensor uses an infrared laser projector to cast a specific pixel pattern on the scene in front of it.

The Structure Sensor’s infrared sensor then records distortions in this dot pattern as you move your iPad around the object you’re scanning, creating a depth (3D) map of the scene and the objects in it. The Structure Sensor’s infrared detector was developed by PrimeSense, now owned by Apple who designed the 3D sensor for Microsoft’s Kinect. The device also uses the iPad’s camera to record colour data.

By using the infrared spectrum, the Structure Sensor overcomes an important limitation of the previous white-light models: scanning quality is conditional to both the colour of the scanned object, as well as prone to interference from ambient light. Furthermore, the firmware within the Structure Sensor allows the user to manually move the sensor around to capture the entire volume of the object.

The reported accuracy of the Occipital’s scanner is 4mm, but we found in our test lab that accuracy was highly dependent on two factors: the distance the scanner was from the object, and the length of time of the exposure.

The image in Figure 1 took roughly 60 seconds to capture and appears comparable to the far more expensive Steinbichler scanner used in Figure 1, with only a little distortion around the Achilles region and our little reference nobs. 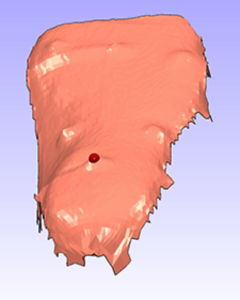 Figure 2 – A CAD image from a SharpShape laser scanner.

Similar to structured light scanners, laser scanners use either a laser line or single laser point to scan across an object.

A sensor picks up the laser light that is reflected off the object, and using trigonometric triangulation, the system calculates the distance from the object to the scanner.